It is just over 1 year since the BRE released their BREEAM Refurbishment and Fit Out (RFO) 2014 scheme. Historically both refurbishment and fit out, and new construction projects, were assessed under a common scheme manual. Where issues only applied to refurbishment or fit out projects, these were highlighted in the notes within the scheme manual but often not easy to find. This approach was often quite time-consuming and laborious.

At BAM, we already have a few projects being assessed under this new scheme. It is vital teams are aware of the differences between the BREEAM RFO scheme compared to the BREEAM New Construction scheme, so here are 5 key differences to be aware of:

1. The scheme is now spilt: 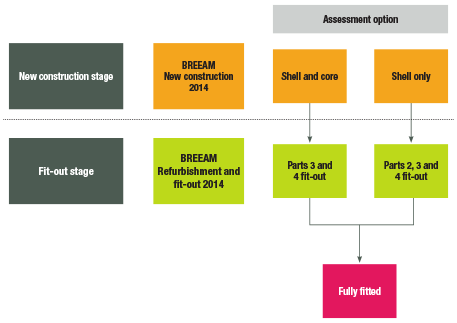 Depending on the scope of your project, you select the applicable part/s, allowing flexibility. It now allows a New Construction project’s score to be ‘topped-up’ (if it was originally a ‘shell only’ or ‘shell & core’ project), to make the project Fully fitted BREEAM rated. This can be done by undertaking a further BREEAM RFO assessment.

2. Some issues are not applicable.

This makes sense as some aspects of a refurbishment and fit out project are not applicable to a new construction project.

For example, the credit for selecting a site on previously occupied land, which is not within the remit of a RFO project, is not applicable, so the Land use and Ecology (LE) credit 01 has been scoped out. The LE 03 credits have also been scoped out, with the remaining ecology credits only being applicable when within the scope of the contract. This is similar to a number of other credits (Transport 01, Materials 05 etc.) which are dependent on which “Parts” (see above) are being undertaken.

3. There have been some minor changes to credit wording

There are plenty of credits where the wording has been slightly altered to make the credits applicable to a RFO project. For example under Management 01, broader consultation with the community impact is only required for change of use and public building refurbishment projects. An example would be where there is an impact on traffic/transportation due to the change of use.

4. There have been some major changes to the way energy credits are calculated…

One major change is the evidence needed for the Energy 01 calculation. There are two options:

Option 1: EPCs, instead of BRUKL details (like in New Construction), are now used to calculate the credits achieved. This option requires a baseline pre-refurbishment EPC to be calculated based on a model of the original building. This baseline is then compared to an ‘as designed’ (design stage) or ‘as built’ (post construction) EPC of the building, using a BREEAM tool. The BREEAM calculator churns out the number of credits achieved based on an assessment of how the system has been improved, not just how it performs. 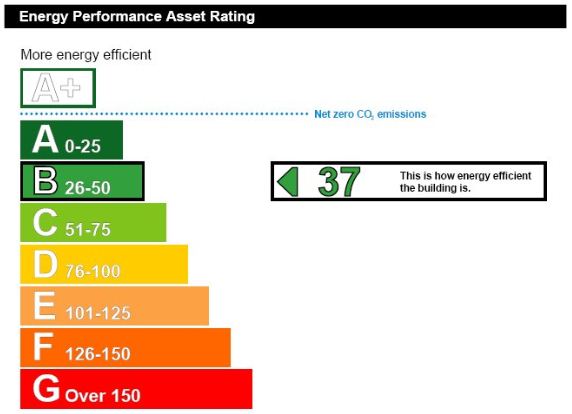 Option 2: More suitable for partial refurbishment and fit out, this option uses a BREEAM excel spreadsheet containing a number of questions has to be answered by the energy modellers, before the spreadsheet calculates the number of credits achieved.

5. There have also been some major changes to the way material credits are calculated…

Another significant change is the way credits under the Materials 01 issue are awarded. Again there are two options for this:

Option 1: Based on a Life Cycle Assessment (LCA) study, up to 6 credits can be awarded depending on the quality of the data and robustness of the LCA tool. You can still use LCA tools such as the IMPACT and the Green Guide ratings, but now you can also use BIM LCA.

Option 2: This is a simplified elemental approach. Up to 4 credits are available depending on the percentage of materials that have been reused or have robust environmental information - ISO 15804 or ISO 14025 Type 3 EPD; ISO 14024 Type 1 EPD.

UTC Leeds is being assessed under BREEAM RFO 2014

These are just 5 of the major points to be aware of under the new RFO scheme. Both BREEAM assessors and design teams should be aware of these differences, and not assume the requirements in the new RFO scheme are the same as the New Construction scheme 2014. Some of the changes may seem minor, but could make a major difference to your BREEAM score.

Julia Messenger is a Sustainability Advisor at BAM.

There are plenty of changes to be mindful of in the new BREEAM RFO scheme, so always seek guidance from your BREEAM assessors when considering whether to undertake a BREEAM assessment. If you would like to learn more about the new RFO scheme, or want to talk to us about BREEAM, Contact us.