PPE for all, including cyclists

Cycling is great exercise, cheap and one of the most environmentally friendly forms of transport available. But the number of cyclists killed or seriously injured on the roads has risen by 10% in the past year according to the Department for Transport. 53% of cyclist fatalities in London involved a heavy goods vehicle, between 2008 and 2012. So what’s being done to make roads safer?

This week, BAM is supporting Road Safety Week to raise awareness of what different road users - including drivers, pedestrians and cyclists - can do to make the road a safer place for everyone.

For two years running, BAM has organised a 'BAM bikes for Macmillan' challenge where more than 150 employees have embarked on a nine-leg 900-mile cycling trip of the UK in aid of our national charity partner Macmillan Cancer Support. Not only did the challenge raise funds for the charity but also promoted the benefits of cycling to our workforce. BAM is a great supporter of cycling and offers a discounted cycle-to-work scheme on all of our construction projects. 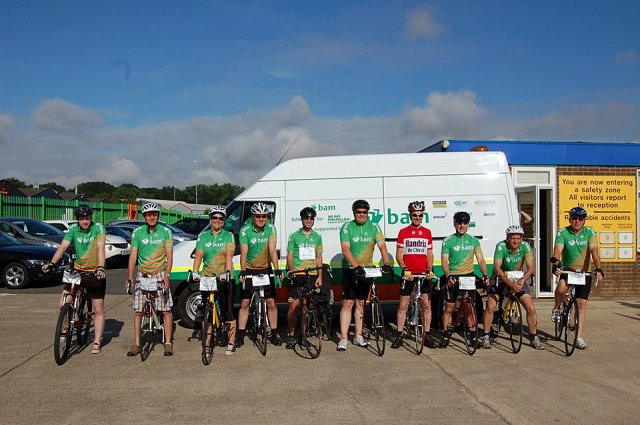 When it comes to cycling, I think Personal Protective Equipment (PPE) should be compulsory for cyclists. Although I only cycle 30 minutes a day from my house to the train station as part of my commute into London, I always make sure I wear high-visibility clothing, bike lights and a helmet. And I’m always surprised at how few people do.

Yet 40% of adult cyclists had head injuries between 1999-2005, and studies have found wearing a helmet can reduce your risk of head injury by 85%.  Many countries, including Spain, Iceland, Canada and the Czech Republic have already made it compulsory to wear a helmet. Why can’t the UK?

I would never be allowed onto any of the sites I visit as part of my job without PPE – steel-toe capped boots, high-vis jacket, hard hat, glasses and gloves. Nor would any other visitor to site. PPE makes you visible and lowers your risk of injury. Glasses protect your eyes from debris and dust, gloves protect your fingers from sharp objects and give you better grip and site boots will keep your toes whole, should anything happen to fall on them (they also prevent stubbing!).

Another way to avoid injury is to be seen. In the construction industry, high-vis clothing is worn so that moving vehicles, including cranes and reversing vehicles, can more easily spot workers on site and so that workers look out for each other in what can be a high-risk environment. The same applies to cyclists. By wearing high-vis clothing, with reflective strips, cyclists are much more visible on roads, particularly at night. And lights (back and front) are a must, and a legal requirement.

Cyclists can only do so much of course, and Brake, the road safety charity, is asking drivers to make the Brake Pledge, to make roads more safe. At BAM, our plant division has just gained Fleet Operator Recognition Scheme (FORS) bronze accreditation. This accreditation helps us to continue to raise road safety awareness and training among our 232 fleet vehicles, and we encourage our supply chain to have FORS certification too.

One of the best ways to keep vulnerable road users safe is segregation. On our sites, we minimise the risk of multiple road users interfacing by having clear traffic management plans and by:

Although many of these can’t be applied off-site, the concept of segregation is a good one. London has finally come round to this idea, although the feasibility of a super-segregated-highway for vulnerable users is still being debated.

So much more can be done to make roads safer for everyone, although common sense, and compulsory PPE would be a good start for many!